I just returned from the city centre where my taxi driver and I decided to have a lunch at one of the local fast food places. It was quite crowded today but what I noticed had really surprised me: young lady in their uniform acting as a queue facilitator. What she was doing was very simple but it was very efficient: when she saw people stuck at one of the "sectors", she would go there and start briefly telling them a) what the choice of dishes they have today at that sector and b) how important it is that they tell people at the counter beforehand what they want, so that the rest of the queue could move. I was surprised with how efficient this simple technique was. Whoever she was originally (she was most likely one of the people that give you your dish or maybe the cashier...) she was able to help waaaay more than if she would do her primary job. 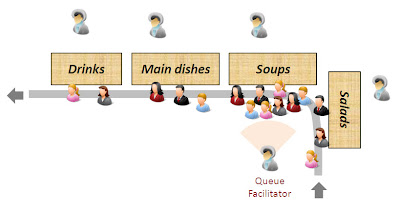 So, when we entered the line, she started at "Soups" but in about 2 minutes she was already at Main Dishes sector but then again back to Soups and then over time she disappeared when the line became smaller and leveled.

1) What she was actually facilitating was a focused decision making process, something I honestly dislike about our human behavior - wide choice paralyses us. So she helped everyone to stay focused.

2) I never saw anything like this in this chain of fast food restaurants. This means that they only used it under the pressure of high load at peak time.

This is apparently something good for Scrum Masters to think about. But actually anybody on the team may sometimes take the lead and facilitate natural queues in development - stories, tasks or DBT-cycles, automated tests to implement, classes to build, methods to cover with unit tests and so on. Sometimes simply helping others to see that they are dealing with the queue and that the queue is longer than we may currently think and that constantly moving forward (without "over-processing" and extra checks and hesitation) is crucial - helps tremendously!