Acceptance Test-Driven Development heavily relies on automated scenarios that reflect the key behaviors of the system. Basically it represents the way and the team process to physically bind the requirements, expressed as acceptance tests, to the code. Besides these key acceptance tests, or in other words – examples of system functionality – teams normally also want to ensure that certain less obvious and less predictable behaviors are implemented correctly. "Less predictable" and "less obvious" does not mean that they are less probable. In fact, teams, by definition, have their "implementer bias" and may easily overlook things. That is the reason for exploratory testing – to look at the system from a new angle, to try scenarios that have not been tried before, to play with different combinations of environment and configuration settings, so on and so forth. This important effort involves both creativity on the part of testers and their hard work in running desirable scenarios under certain conditions. The process most often entails one more of the following problems:

• It consumes a lot of the testers' time. Very often they perform all or almost all operations manually, which, apart from the execution of desirable scenarios, also includes manual environment setup, data preparation as part of different upstream scenarios, etc.

• It takes developers a lot of extra time in the case that they create and maintain special harnesses for manual testing.

• The tests are not persistent. Even when the team performs some kind of automation, typically there is a considerable gap between the process of exploratory testing and the automation of those valuable new test scenarios obtained as a result of exploration. The gap is both in terms of time and skillset due to the fact that exploratory testing is often performed by manual testers while, most often, automation is done by developers or automated test engineers.

• Testers' options are mostly constrained to black box testing. System-level scenarios result from a combination of different conditional flows that occur in different parts of the code. The problem is that it is impossible to test the system by only operating at a high level – we simply experience a "combinatorial explosion" – a stratospheric number of scenarios.

• The knowledge and context of sharing with developers is ineffective. While testers may play with certain type of system behaviors and even catch some interesting defects, there is almost no sharing of their tacit knowledge about the system with the developers, no collaborative analytical thinking, and no generalization or synthesis. There is no way to induce the specific useful implementation or design takeaways from the findings discovered during exploratory testing.

ATDD turns out to be very useful in creating certain behaviors and effects that help to address these problems. The secret is in the team's ability to quickly automate new scenarios, in the tooling, that turns out to be extremely useful, and in constant collaboration that drives ATDD process. Here is how it works. 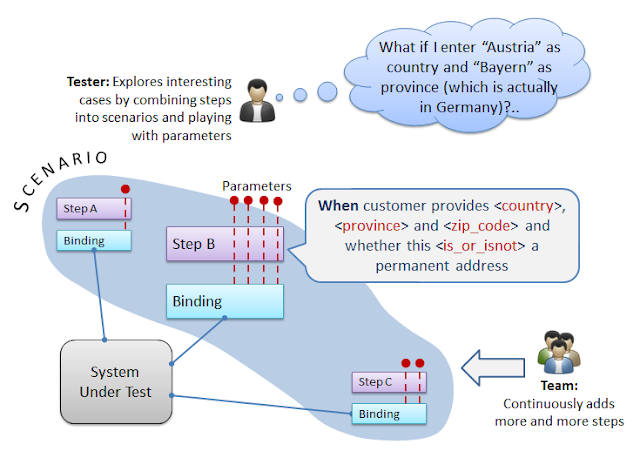 ATDD relies on automation tools like Cucumber, SpecFlow, FIT, RobotFramework etc., which allow for defining scenarios in business language. These scenarios are then physically linked to the system by what is called "bindings" or "scenario step definitions" – little pieces of code that interpret the corresponding scenario steps, and run them against the system. Very often these steps are parameterized, so that, for example, this would be a step written in Gherkin language, which is used in tools like SpecFlow and Cucumber: "customer provides